I am Jannatin Naim from Pabna, Bangladesh and my favorite field of study is English. In the case of self-defense, I know some of the cool tricks that can be helpful to defend oneself from the enemies without killing anyone. So, I would like to share my knowledge about it.

Self-defense is very important for both males and females. But if we are unable to defend ourselves from our enemies, it can be dangerous. For this, it is necessary to keep a tool with us and also learn to use it in a proper way. Otherwise, it can be harmful. There are many kinds of self-defense tools by which we can defend ourselves. In fact, people can go to wars with those tools to attack and defend themselves. We can invent some innovative tools by which we can attack and defend ourselves from our enemies without killing anyone. For example, if we are suddenly surrounded by 5 or 6 robbers we can use those innovative tools to protect ourselves and others without resulting in any deaths. Again, that tool can be used to fight and defeat our enemies in large scale fighting and wars without resulting in any deaths on any side.

1. PEPPER SPRAY: Pepper spray is known as a non-lethal weapon or a weapon that cannot kill people. It containing oils derived from cayenne pepper, irritating to the eyes and respiratory passages and used as a disabling weapon. Pepper spray is very effective most of the time. Pepper spray will fail when it’s old, replace it every two years. In most cases, the immediate effects of being sprayed in the face with pepper spray include a burning sensation in the non-lethal inflammation of all mucous membranes in the eyes, nose, mouth, and lungs, temporary debilitating burning sensation and throat but can also cause difficulty breathing and temporary blindness when the eyes swell shut. Cause eyes to slam shut from intense burning. If you were truly defending yourself and you can prove it, then it is unlikely that you would be convicted of a crime. Never use Pepper Spray unless you feel you are threatened or you need to protect someone else. If you pepper sprays an attacker, flee to a safe location and call the police as soon as possible. Do not try to capture your attacker. The effects of pepper spray may vary from person to person but will last between 15 and 45 minutes. Unfortunately, some pepper spray is messy, smells bad and just isn't pleasant - it will smell a little foul. Pepper spray is still a safe and effective weapon indoors; however, it is important you know how it works and how to handle it. In most cases, pepper spray is non-lethal, but it is known to cause irreparable harm. Even when pepper spray isn't inhaled, its effects on the skin and eyes can require hospital attention, causing intense burning pain, swelling, inflammation, and redness. We can make pepper spray at home so easily.

2. TASER DEVICE: A weapon firing barbs attached by wires to batteries, causing temporary paralysis. Fire a Tasers (at someone) in order to incapacitate them temporarily. Tasers, also known as stun guns, can cause sudden cardiac arrest and stop the heart. An electric shock with an electronic control device to the chest can be harmful. TASER devices and stun guns differ in various things, the biggest being range. While a TASER gun can be shot from a distance, a stun gun requires direct contact with the attacker. Both deliver a powerful shock to the attacker and are meant to give you time to create some distance between the two of you. It doesn't just hurt, and it's called less than lethal. There are many kinds of Taser. Lipstick Taser is one of them. The kiss of death or lipstick pistol was a pistol used by the KGB during the Cold War. It was a single shot 4.5 mm pistol hidden inside a lipstick holder. LIPSTICK STUN GUNS are made to look like a large tube of lipstick. The lipstick stun gun is a little more than what someone would expect. The best defense is the element of surprise. These units have a flashlight and are powered by a built-in rechargeable battery. 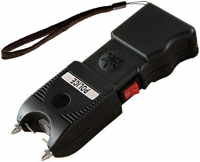 3. STUN GUNS: A device used to immobilize an attacker without causing serious injury, typically by administering an electric shock. The Los Angeles Times newspaper has reported that the troops used a stun gun to administer electric shocks to a suspected resistance fighter. 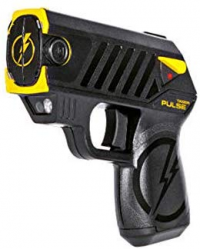 4. SLINGSHOTS: A forked stick, to which an elastic strap (or a pair of elastic bands connected by a small sling) is fastened to the two prongs, typically used for shooting small stones. Forcefully accelerate or cause to accelerate through the use of gravity. A powerful slingshot can indeed be lethal. Any of the potent “wrist rocket” type devices with strong rubber bands can deliver a steel or lead projectile at perhaps a couple hundred feet per second. That's enough to defeat someone if it hits in the right place. When Lumberton first moved to the desert at age ten, he took pleasure in impaling whiptail lizards or stoning songbirds with his slingshots. 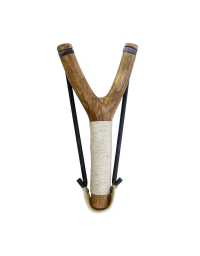 5. BATONS: A baton is any stick made out of metal or wood that is used for military or police purposes, and it is one of the best self-defense weapons around. As compared to knives, handguns and other means for self-defense, batons are far more useful. They are easy to use and concealable, so you don't require training for learning how to use them. Also, a baton is a non-lethal weapon because it does not inflict a permanent injury to the victim. The baton is a deadly weapon. Perhaps, not only by definition but also certainly by capabilities. The baton is an integral part of the officer's continuum of force. They play a major role in the sequence of activities an officer may engage when facing a non-cooperative or combatant suspect. Like Tasers and pepper spray, batons are referred to as "less-lethal" rather than "non-lethal". That is, these weapons are not designed to be fatal, but they can be. 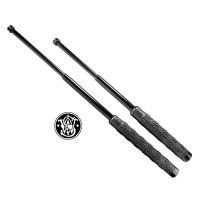 6. FOUNTAIN PENS: A fountain pen with its sharp nib is a much more lethal stabbing 'weapon' than any tactical pen or in fact any ballpoint or rollerball pen. A fountain pen is not illegal. It is considered a non-lethal weapon. That does not mean they can't kill; it just means that they are not designed to. Murder (even in the name of self-defense) is something you should avoid if possible. Killing someone with a fountain pen would take a lot of effort. The fact is though, just about any pen can be used as a weapon. All you need is to have an inch or so sticking out of your fist as you hold it, and then use it to poke holes in the fleshy parts of your attacker.

7. POCKET STICK: It is also called Yawara or Kubotan, a pocket stick is a simple yet effective weapon to carry anywhere. Sports equipment such as baseball bats, golf clubs, cricket bats, hockey sticks and dumbbells, etc. are also used as a self-defense weapon. You can also use a walking stick in case of any emergency. 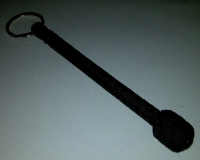 8. HAMMER STRIKE: Using car keys is one of the easiest ways to defend the enemies. The hammer fist is a strike with the bottom of a clenched fist, using an action like swinging a hammer, but can also be used horizontally like a back fist strike using the bottom fist. The hammer fist is sometimes used during “ground-and-pound” striking in mixed martial arts to avoid damaging the bones of the hand. While sprinting, use thus Melee Ability to unleash a blazing hammer strike that weakens enemies.

9. ANY OBJECTS: We can use any different kinds of objects such as sound alarms, Taser ECD, living alarm system, paper crossbow, canes, hairspray, sock weapon, and legal in most states. Any object of measurable mass can with the right kind of knowledge be used as a weapon either directly or as part of the process of developing a more effective weapon. Many ideals can also be used as weapons. 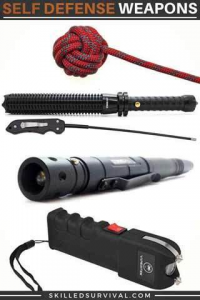 10. SMALL PORTABLE: Small portable things can be used as a self-defense tool. Such as wires, rings, rubber or elastic sticks, etc. These things are easy to carry and very helpful for self-defense. These home defense weapons can be kept in a nightstand or carried in a purse in case of an emergency.

Always be loud to intimidate the attacker and create attention in case somebody is nearby. For example, if we are suddenly surrounded by 5 or 6 robbers, we can use these innovative tools on the attacker and defend ourselves. Again, in war, if we use these weapons, we can defeat our enemies without resulting in any death in any side. So, be safe and careful in every step of life by using these tools.